Jessica Tartila Suma is Lecturer in Media and Communications at Independent University, Bangladesh (IUB),. She has completed her Masters in Political Science ( United Nations and Global Policy Affairs) from Rutgers University, New Jersey, USA. Earlier she completed her Masters in Development Studies (MDS) in the year 2013. She pursued her BSS (Honors) in Media and Communication from IUB in the year 2008. Jessica also served as a faculty member in a joint effort between University of California San Diego (UCSD) and IUB Special Academic Research Project 2015: Film-making and Television Journalism for Peace and Tolerance in Bangladesh. She also was Field instructor for The Higher Education Consortium for Urban Affairs (HECUA) students from Minnesota USA.
At IUB, Jessica had been the Coordinating Faculty for the Committee for Upgradation, Development and Research (UDR) of the Media labs of the Department of Media and Communication, IUB in the year 2014 through 2016. She is also a Core Research member for establishing the Center for Social Science Research (CSSR) at IUB. She has published research paper on Migration of Street Children in Dhaka City:  A Bleak Future  in the Bangladesh Journal of Social Studies in 2015. Her paper Media Framing of Liberation War of Bangladesh in 1971 has been presented in the International Conference on Social Sciences titled “Identity in the Globalized World: Dimensions, Transformations and Challenges” in the year 2014.  Her areas of interest cover quite interesting but challenging topics that includes theories of Communications, Theories of Development, Communications for Development, Political Communication,  Democratic transitions and American Foreign Policy.
She had been the Faculty Advisor of the International Affairs Club(IAC-IUB) from 2010- 2016 and the Independent Photography Club (IPC- IUB) from 2009- 2016.
Suma worked as Senior News Presenter in ATN Bangla  and Boishakhi Television from 2008 to 2016. She had worked with Time Television, New York,  as a guest News Presenter and anchor from 2016 to 2018. She is a Senior member of the News Broadcasters Association, Bangladesh (NBA). 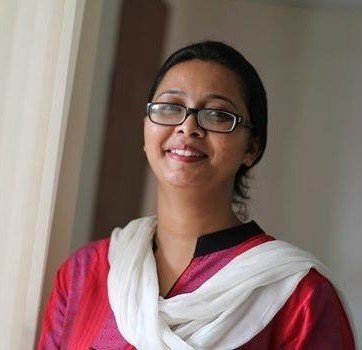